Susan, a refugee from the Congo, got her first job in the U.S.!

Susan is a refugee from the Democratic Republic of the Congo. Like thousands before her, she fled the Second Congo War, a civil war that raged from 1998 until 2003. She was forced to abandon many family members and her livelihood, a prosperous corn and bean farm.

Susan fled with her husband to a refugee camp in Uganda, one of four host countries for refugees, including Burundi, Rwanda, and Tanzania. In Uganda, DRC refugees receive food aid and were able to work. But Susan said that the refugee settlement was a still a hard place to live and raise children. It was unsanitary and very difficult to get to the doctor if you were sick or pregnant. Last year, after nearly two decades living in the camp, she was able to move to the United States.

Susan built a home for her family in Rogers Park. She found an apartment, her husband found a job, and Susan started English classes at HACC.

In one year she learned basic English language and literacy skills. Enough to accomplish another milestone: her first job in the U.S. Susan is now bagging groceries as a courtesy clerk at Jewel Osco!

This job is vital for Susan, her husband, and their two children, who are four and five years old. While Susan said she is happy the family came to the U.S. she also acknowledged that the challenges are not over. It is difficult to afford rent as a refugee in America. Currently, her family pays over $1,000 per month for their two-bedroom apartment in Rogers Park.

Affording the essentials for a family of four is almost impossible for two adults making the minimum wage of $11.00 per hour even working 40 hours a week.

This year, Crystal and Robin went above and beyond, developing a new relationship with a local Jewel Osco. They served as mediators between Rogers Park employers and job seekers without high school diplomas and customer service experience. 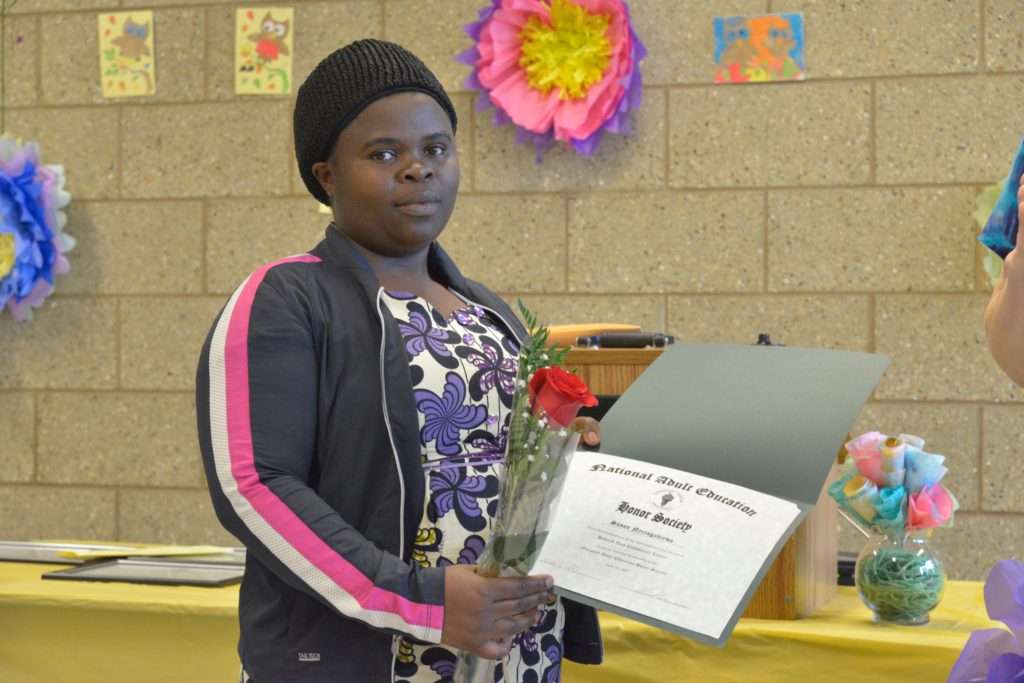 “This is victorious,” Crystal said. After six months of working together on job preparedness, “Susan wasn’t scared. She was ready for the challenge and didn’t say ‘Oh, I can’t do it.’”

Crystal’s curriculum at HACC is comprehensive and practical. She worked with Susan on learning entry-level job vocabulary, like cleaning supplies and customer service greetings, reviewing uniforms and work clothes for different positions, and how to record and calculate your pay checks. Role-playing interviews were also a crucial part of the process. Susan learned how to market her skills and discuss her schedule availability with her potential employer.

Today, there are also technical challenges in the job hunt. Immigrants and refugees who do not have regular access to computers can suffer in the application process.

“It’s not paper and pencil anymore. This is the digital world,” Crystal said. She helped Susan create a resume and apply to Jewel Osco online.

Susan’s new job at Jewel Osco has advantages that are often not afforded to low-wage refugee workers.  She has a job close to her home with life insurance, health insurance, and full-time benefits for herself and her family.

Her husband  works at a meat processing plant – a common job  for immigrants.

“What happens to refugees when they do get placed, they get placed in what I call ‘the underbelly’. The jobs nobody wants,” Crystal said.

For example, at many meat-processing facilities, Crystal said she had had immigrant clients tell her that they work in freezers, as low as 40 degrees, all day, making it easy to become sick.

HACC’s new relationship with Jewel Osco means that there are safer job opportunities for immigrants and refugees like Susan, no matter their level of formal education and job experience. Congratulations to Susan and the HACC team for their hard work and success!

Interested in working with HACC to find incredible employees? Contact Charles Hardwick at rlange@howardarea.org or by phone at 773.262.3515.